The Oracle Project is part of an ongoing investigation into synchronicities and the search for meaning. Taking as its premise the possibility that events taking place in one location may have convergent threads of association with those in another. It has taken the form of the artist wandering throughout the city in what he describes as the analogic world and communicating with his audience via a mobile phone. Remaining open to the exigencies of the moment he reports on what he encounters leaving the recipient of the message to ponder the possible lines of association between what is communicated and their own situation.

It is understood that the process of translation is complex, poetically stated;

Events in the analogic world must change
like leaping hares
Into stags, antler winged
And leap again
To take flight in another life.

This is an allusion to the old notion of the cauldron of transformation as a metaphor for the locus of separation between artist and audience linking the work with vatic practices involving the utterance of poetry found in ancient British and Irish texts.

While the text above says something about my grandiose aspiration for this piece. Many of the ideas embedded within it were built up using various Oracular devices, such as the I Ching and Tarot. One of the earliest readings seemed to suggest the question, what sort of reality can you create through appearances? ~ that seemed straightforward enough, it is after all an artwork rather than the demonstration of any oracular gift. Another reading suggested my situation was like a bridegroom “with painted feet and oiled hair setting out to claim a bride”. Hexagram 60 is perhaps one of the most instructive; “Articulating refers primarily to a point or juncture in time, a crossing point of heaven and earth, of the horizontal and the vertical…..Through these ‘crossings’ or ‘joints’ the energy that animates the Myriad Beings condenses and displays itself as symbols, symbols of transformation that in turn give access to primal energy or Way, joyous words from the other shore.” 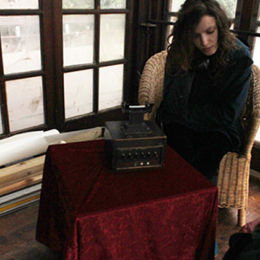 From Garden Oracle : the severed wing of a bird lies on the ground, even though birds circle overhead. 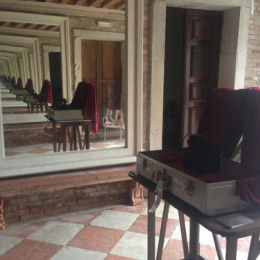 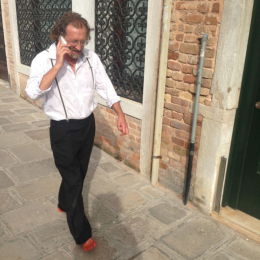 My feet are painted with venetian red to facilitate a connection with the history of the city. 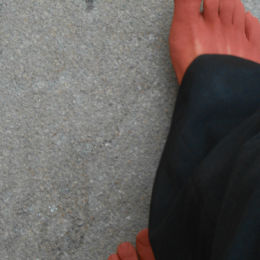 On painted feet red with the ochre of time , I enter the analogic world of the city. Like a bridegroom searching for his bride , but the bride I seek is the moment of encounter. For it is only then that a centre may be found and the Oracle revealed.